There are always adventures on the sea


Price includes: 2 hours of sailing with guidance along the way – Coffee and Tea are complimentary.

You should choose this tour if you would like to enjoy nature in and around the Nuuk fiords. Often we see wildlife like the white-tipped eagle, seals, or maybe even a humpback whale during the summer months. We don’t have a specific route for this tour, the captain might have heard of a whale sighting or an intriguing iceberg and will sail towards those if possible.


Sailing in Greenland can be just the kind of Transformational Travel you need. The stillness as we swipe through the fiord, with no cell reception, gives you the utter sense of freedom that the first people must have felt when they arrived at the Greenlandic coastline around 5.000 years ago.

We will follow in the footsteps of the first Inuit, as we cruise around to the best of their hunting grounds. Some of the areas don’t have any animals to offer other than the seals and whales – some of the areas used to include the mighty walrus.


There are also very good chances of seeing icebergs all year round – These magnificent structures stand as living proof of climate change.


You don’t have to be a scientist to realize what this means, that eventually the glaciers will calve the ice on land, hence stops the production of icebergs, as the ice just stays on land and melts, creating rivers of water running out in the ocean, instead of icebergs.


We invite you to join us for an experience of a lifetime in this Fiord Adventure Nuuk.


Experience the fiord of Nuuk on this tour 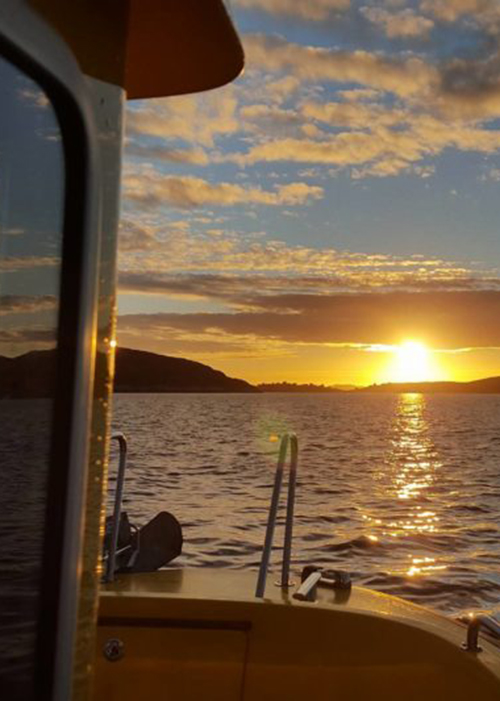 When you are going out on an adventure, it is highly recommended to bring both camera and binoculars. It is also advisable to bring warm clothes. On this boat there is a cabin, but prepare and bring clothes that keep you warm. A neck warmer and glowes is always good.

You are allowed to bring your own food, but it is also possible to order sandwiches or lunch plates, later in the booking process.